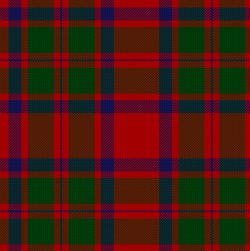 Shaw Macduff, son of the Earl of Fife, was appointed keeper of the Royal Castle of Inverness around 1163 and received lands at Petty and in Strathdearn. He took the name Mac an Toiseach – The son of Thane (a noble acting as an official of the crown). The connection with Clan Chattan began in 1291 through the marriage of Eva and Angus and, for almost 650 years, the Chief of Clan Mackintosh was also the Captain of Clan Chattan.

The Mackintosh territory at one time extended into Lochaber and Badenoch, but for centuries it has had a close association with the town of Inverness (now of course a City), whose southern approaches the Clan dominated. In 1938 the Chief died without direct male heir and the Lord Lyon held that the chiefship of Clan Chattan had become separated from that of Mackintosh. Until his death in 1995, The 30th Chief, Lachlan Mackintosh of Mackintosh lived at Moy which had been acquired by William, 7th Chief of Mackintosh in 1336.

Motto: Touch not the Cat bot a glove