The Clan Chattan is often known as the “Clan of the cats” for its constituent clans mostly carry the wild cat in their badges. This may be a pun on their origin with the devotee of St. Cattan. Each Clan has the cat in its own particular pose. The Clan motto is “Touch not the cat bot a glove” – “bot” meaning without. A stern warning to anyone threatening Clan Chattan or its members. 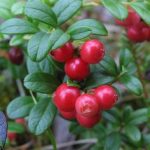 The plant badge worn by Clansmen is the Red Whortleberry which is found in abundance in forests, moors and in the slopes of the hills of Clan Chattan Country. In Gaelic it is known as Lus nam braoileg; in Latin, Vaccinium vitis-idaea and elsewhere the Cowberry. It flowers from May to August and from then until October produces a berry which gradually turns from green to a deep red.

We use cookies to ensure that we give you the best experience on our website. If you continue to use this site we will assume that you are happy with it.OkRead more