The wildcat arrived in Britain from Europe at the end of the last ice-age, over 9,000 years ago, when there was still a land bridge to the continent.   The Latin name for the wildcat is Felis silvestiris which means ‘woodland cat’ and since forests first covered Britain, the cats followed the spread of suitable habitat and prey so that by the time this country became an island they were to be found over its entire length and breadth.  The Highland wildcats form the most northerly population of the European wildcat and is generally considered a separate subspecies, Felis silvestris grampia.  It was once widespread in Britain, but disappeared from lowland farming areas by the end of the 18th century because of the spread of agriculture and persecution by Edwardian and Victorian gamekeepers who saw them as a threat to grouse stocks.  Scotland was once covered by extensive forests but increased agricultural and industrial use of land and the ever growing human population over the last century has resulted in great changes to the landscape.  A programme of deforestation in the early 20th century resulted in the remaining woodlands being fragmented and making it more difficult for wildcats to find areas of forest large enough in which to survive.  The two main habitat requirements of the wildcat are shelter and food.  Woodlands and areas of dense undergrowth provide shelter as do young forestry plantations as they are protected from grazing, and also tend to support a high density of small mammal prey species. 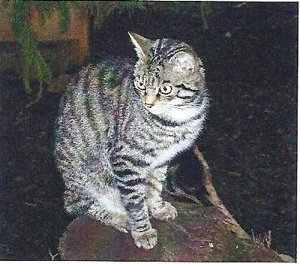 Few people in Britain have seen a Scottish wildcat in its natural surroundings, as the species now only exists in more isolated areas of the Highlands.   The Scottish wildcat is really a forest animal that requires extensive tracts of woodland, or wild country, to flourish.  Although it belongs to the same species as the domestic cat (Felis sylvestris catus) and has similar markings to the domestic tabby, the wildcat is considerably larger and more robust with dark stripes on their bodies, broad, blunt heads and bushy tails which are strongly marked with between three and five black rings, ending in a rounded, bushy black tip.  The eyes are generally amber and the nose a distinctive pink colour.  Pound for pound, the Highland wildcat is probably one of the most vicious carnivores.  The male is usually larger than the female at an average weight of around 5.3kg, while the female average is around 3.7kg.  They are muscled, highly aggressive creatures that can kill, in seconds, any rodent, rabbit or hare unlucky enough to cross their paths.  The wildcat is undoubtedly one of the most iconic and evocative mammals in Scotland, and yet almost hunted to extinction – there may only be less than 100 (and a recent survey suggested only 35) pure Scottish wildcats remaining.  With so few genetically pure specimens remaining, each wildcat faces a near impossible task of finding a mate in order to produce the next generation.   To put their plight in perspective, there are over 1,000 giant pandas, 3,000 tigers, and 20,000 polar bears in the world.  An alarming statistic that has prompted a rescue bid that will be the UK’s largest ever conservation project.

The wildcat is considered an icon of the Scottish wilderness and has been used in clan heraldry since the 13th century.  The Picts venerated the wildcats, having probably named Caithness (Land of the Cats) after them. According to the myth, the ancestors of the Catti tribe were attacked by wildcats upon landing in Scotland.  Their ferocity impressed the Catti so much that the wildcat became their symbol.  A thousand years later the progenitors of Clan Sutherland, equally impressed, adopted the wildcat on their family crest.  The Chief of the Clan Sutherland bears the title Morair Chat (Great Man of the Cats).  The Clan Chattan Association (also known as the Clan of Cats) is made up of 12 different clans, the majority of which display the wildcat on their badges.

Since 2010, the Clan Chattan Association has been a member of the Royal Zoological Society of Scotland’s Animal Adoption Programme supporting the Scottish wildcat in the Cairngorms National Park project which contributes towards