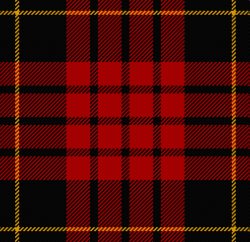 Reven, also known as Roderic mac Milmor vic Swen, who was in the wedding party, settled in Corrybrough in Strathdearn and the Clan took his name. Macqueen of Pollochaig is reputed to have killed the last wolf in Scotland in 1743.

For The Clan website go to ‘Links’ on the information bar